The first total solar eclipse I experienced was in 1991 in Baja with Aram Kaprelians father, Edward Kaprelian, who had advertised in Sky and Telescope magazine. Edward named his company Travel Bug; I still have my souvenir bag. That year I traveled with my sister, Carol Weil, and Jerry Maltz. This year the three of us went with Travel Quest-International, the name Aram gave his company when he took over the business. 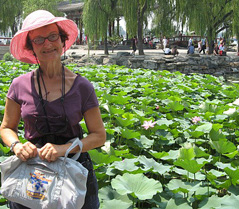 Judith, with 1991 Travel Bug Bag, in a lotus garden, Beijing.

I call myself an eclipse-chaser, as those of us who travel half way around the world to see such a sight generally do. One of my leaders on this trip, Michel, said, No, you are not a Chaser; you are an Addict. Okay, I accept.

Nature writer Annie Dillard wrote in her essay Eclipse that viewing a partial solar eclipse bears the same relation to viewing a total eclipse as riding in an airplane bears to jumping out of an airplane, or kissing a man bears to marrying a man: The one precedes the other but in no way prepares you for the other.

It is difficult to explain the wonder to someone who has not seen an eclipse; each eclipse is unique. On Earth, variables include location, season, and time of day. Features of the Sun change, too, such as prominences, that is bulges or flares in the bright orange chromosphere that can be seen when the disk of the sun is covered, or the shape of the corona, a wispy white outer haze not seen by the naked eye except during totality. During Totality, the light is muted grey. In northwest China near Mongolia in the Taklamakan Desert, the ground is rocky and sandy, and the sparse vegetation shines luminous deep green. The diamond ring at the end of totality was a stunner.

But I want more. My eyesight, and binoculars, were not up to the challenge of seeing finer solar structures during totality. I could not see coronal streamers though others told me they had; I also did not see polar brushes. Next time: upgrade my binoculars to image-stabilizing binoculars.

For my second eclipse, on the Altiplano in Bolivia, in 1994, as soon as totality ended I began a practice that Ive kept up ever since: to Draw what I saw. I encourage others to do the same. One fellow chaser Matt Marcus told me he heard me suggest that back in Bolivia, and now he does it, too.

I remember the 1991 Eclipse in Baja for the brilliant blue of the sky. But that is not always the case. When the clouds parted in China this year, the sky was a muted shade of blue. But as the Moons Shadow advanced and retreated across it, I could see a definite grey compared to the paler blue sky around. The rosy glow 360 degrees around the horizon was unmistakable and familiaralpenglow.

People ask me whether or not I always travel with the same people. The answer: Both. There is something special about being with other chasers. Maybe it is the like-mindedness of people who would do such a thing. Maybe because they are smart. On this trip I enjoyed being on a cruise on the Yangtze with a small Pre-tour group that included Sally and Peter Oberbeck. Peter reminded me that we had drunk Amarula, the local liqueur, together in Botswana in 2002. 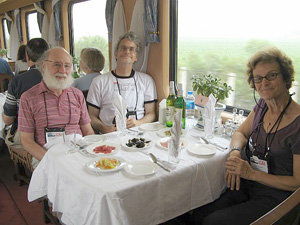 On train from Xian to Hami, at table, Jerry Maltz, Landon Noll and Judith Shanks. 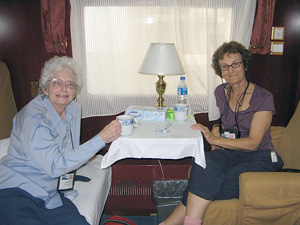 Also special was a three-day train trip on the China Orient Express, from Xian to Hami. The cars were luxurious by Chinese standards; these trains were built for Maobecause he did not like to fly. Travel-Quest was able to charter the train for their guests, and we rode in style. In the dining car, for example, there were linens on the tables; my cabin attendant, Susan, frequently offered tea.

In the Taklamakan Desert, I shared the actual Eclipse-viewing with a group headed by Landon Noll, a friend from my eclipse-viewing trip to Libya. Landon was doing research and had set up his cameras and equipment to gather data. Bernice Noll, Landons mother, I now count as a special new friend.

I have no photos of my own to post because my waist-pack purse, with camera, was stolen on the last day. Sigh. My sister Carol Weil, a fine photographer, generously shares her photos with me. One subject that Carol did not photograph: Babies and toddlers in Urumqui, on the last night of trip, notable because they do not wear diapers or pants. The bib across the chest and stomach is anchored with elastic around each thigh, and tushis are visible on many.

On this trip you can generally recognize me by my pink hat, and the many strings around my neck, my ID tags and glasses. Thank you for sharing the trip, Carol and Jerry (Maltz). And thank you to all fellow-chasers, for sharing this passion and this adventure. And to Aram and team, for making it all happen. And thanks for editing to Bobbie Conlan and Hershel Shanks, for technical help to Bob Rudolph and for web design to Jeanne Berger.

Images submitted by Judith Shanks were taken by Carol Weil. Click on each photo above to see the photo at the original size. 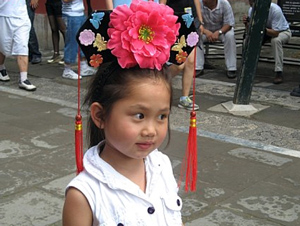 I have tried not to duplicate the images that Carol chose but the little girl with big rose flower on top of her head is my favorite, so I had to include. Photographed in Beijing in Forbidden City. 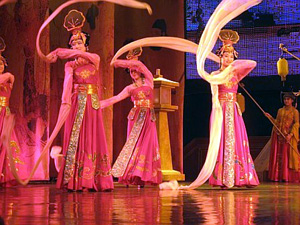 Tang Dynasty Dance Theater in Xian stood out as most beautiful and elegant cultural show. 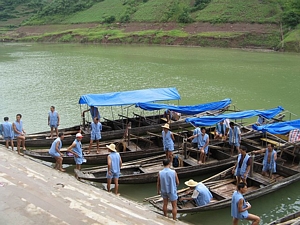 Chinese people dealing with tourists often wear uniforms. The generally pretty young women who acted as tour guides on the sampans wear pink silken pants and a feminine top (I have no photo to show.) 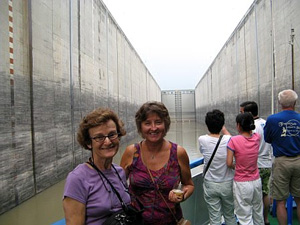 On board cruise boat going down the Yangtzi, Judith with Andrea Crown, passing through a ship lock. 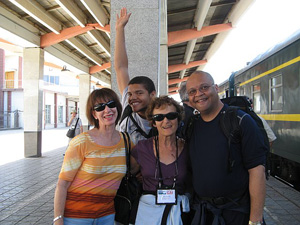 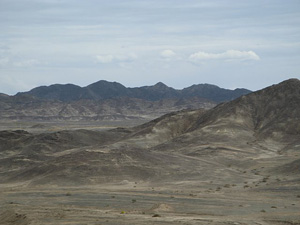 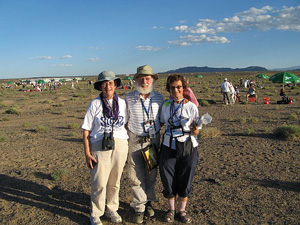